Rouen is the capital of Normandy.  So many famous people had also been to Rouen, Joan of Arc, Gustave Flaubert, Pierre Corneille, William the Conqueror, Claude Monet…of course  those most famous – Muriel and Bree from 3 sistersabroad. (tongue in cheek)

We had the whole afternoon and evening to explore Rouen after our trip to Honfleur.  Our ship was docked in the city centre, just 2-3 blocks away from the Cathedral and the main pedestrian street, Rue de Gros Horloge. 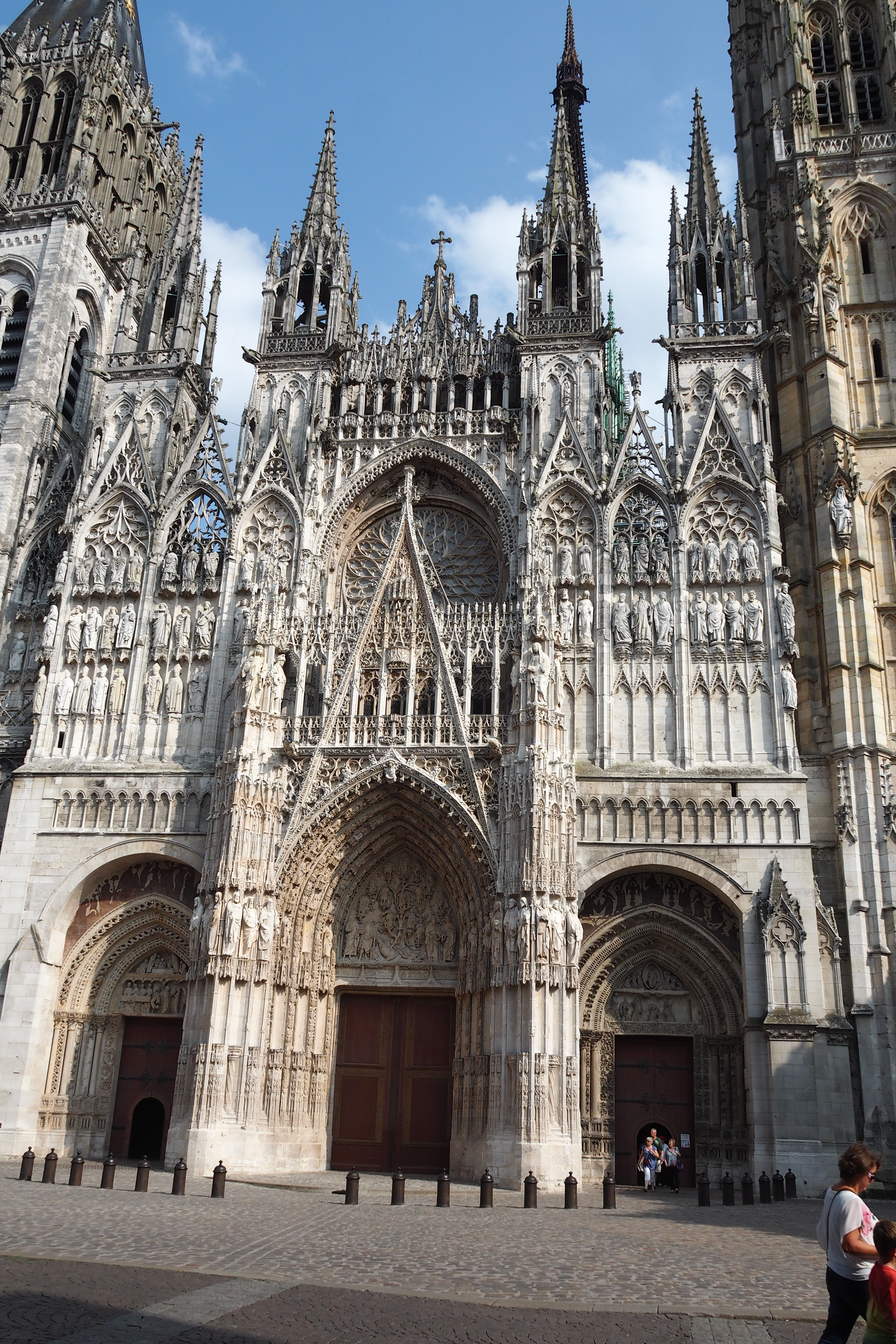 The Rouen Cathedral…isnt it stunning!

Our first stop was the Cathedral, however we spied  – The Little White Train , so we decided to jump on board and see Rouen the easy way first.  We had enjoyed the train tours in other French towns, so why not here in Rouen.  Another reason is you can see all the sights, then it gives you a better sense of direction. 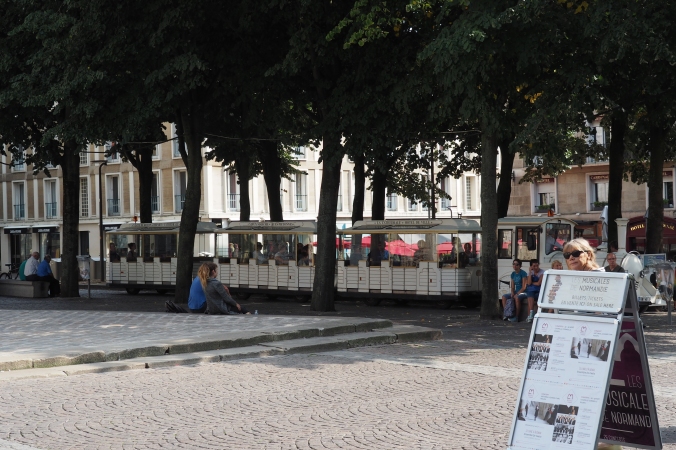 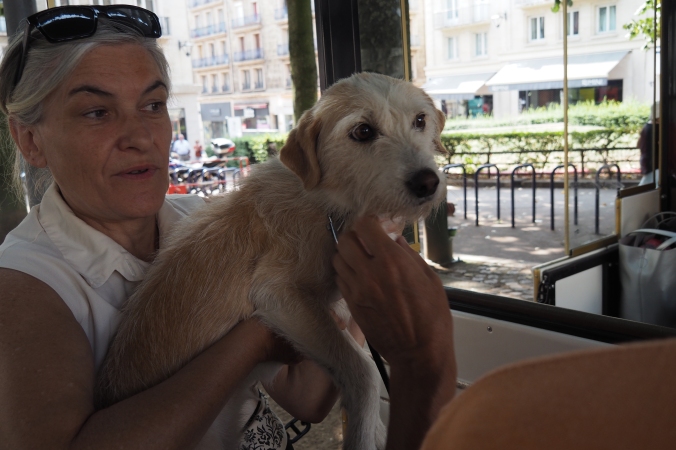 The gorgeous puppy enjoying the Little White Train In Rouen

These little white trains that are in most cities in France are the cheapest and easiest way to see the sights.  They can get down those tiny cobblestone streets that are usually only for pedestrians.

All aboard!  We sat next to a lovely couple, the family dog and their son.  They were taking some time off with their son before he started University.

As it wound its way around  the tiny paved streets of the old town you could get a sense of what it was like to live there all those years ago.

Cobblestone streets with houses that lean over. 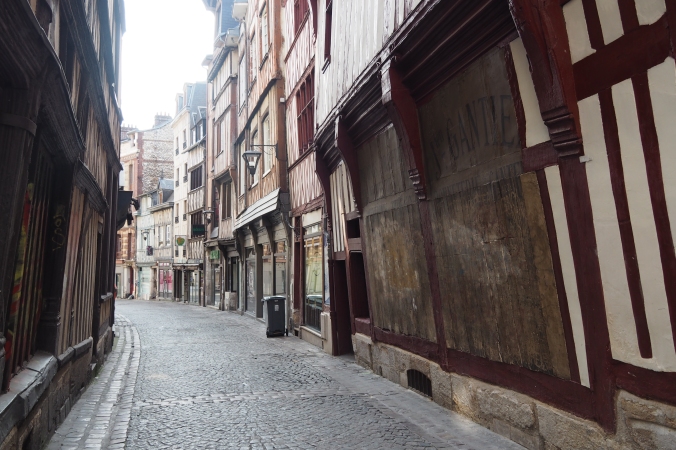 Beautiful cobblestone streets with houses that have a “slight lean” 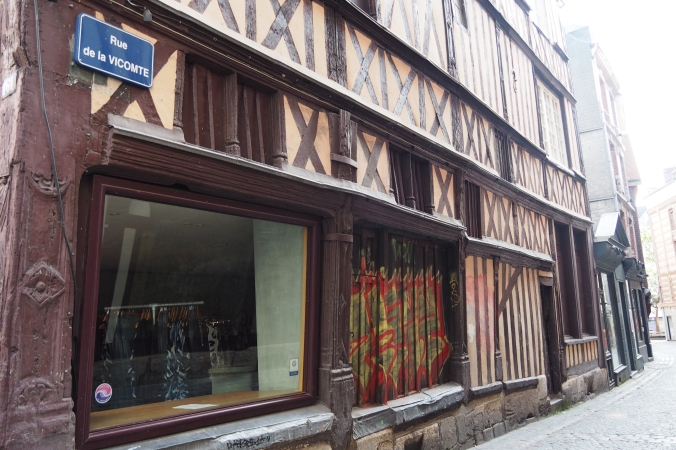 The tour takes roughly 20-30 mins.  Now was our time to walk and see everything we did on the tour.  Of course the train takes you under one of the most photographed clocks in Europe, apart from the one in Prague.  That would be our first stop.  I noticed as we went under that their was intricate carvings underneath. 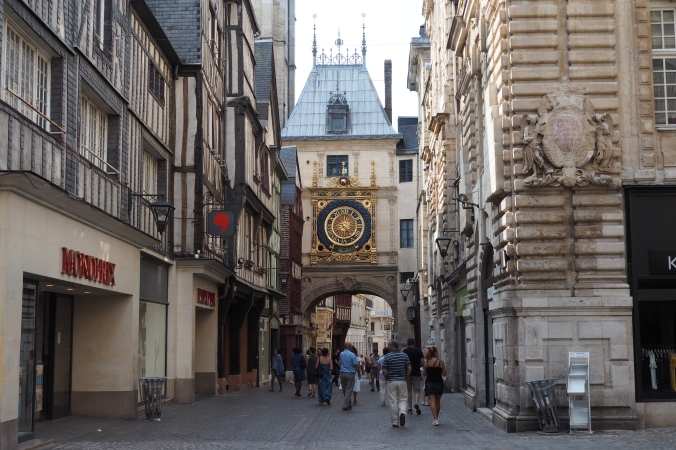 The astronomical clock of Rouen

The clock is in a Renaissance arch crossing the Rue du Gros-Horloge.   The mechanism was made in 1389 making it one of the oldest working clocks in Europe.  You can do a tour that takes you to the top of the clock, this tour takes about 40 mins.

Intricque carving on the arch underneath the clock

We walked a little bit further and the tight tiny streets opened up to a huge square with an odd-shaped building in the middle.  Its actually  the Catholic  Church of Rouen and is called The Church of Saint Joan of Arc. 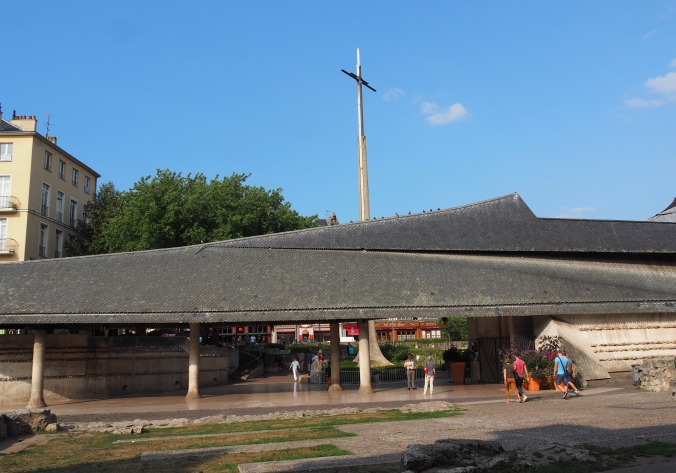 The Church of Saint Joan of Arc

This sign below marks the spot where Joan of Arc was burnt at the stake in 1431. The sign is in the garden next to the Church of Saint Joan of Arc. 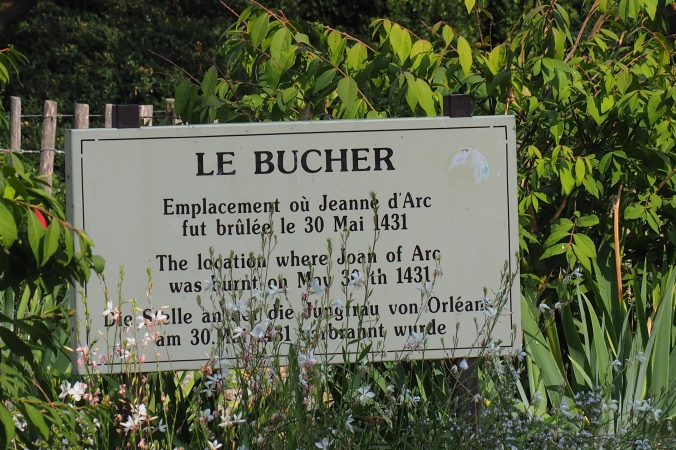 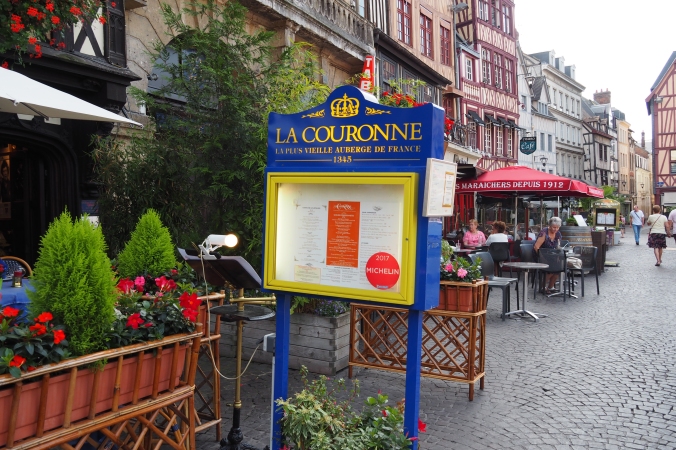 La Couronne founded in 1345, is the oldest Inn in France

Directly opposite the church is this amazing place. La Couronne was founded in 1345 and is the oldest Inn in France.  On the first floor of the restaurant contains photos of personalities.  Julia Child is said to have had her first French meal at this restaurant, which then inspired her to devote the rest of her life to French cooking. 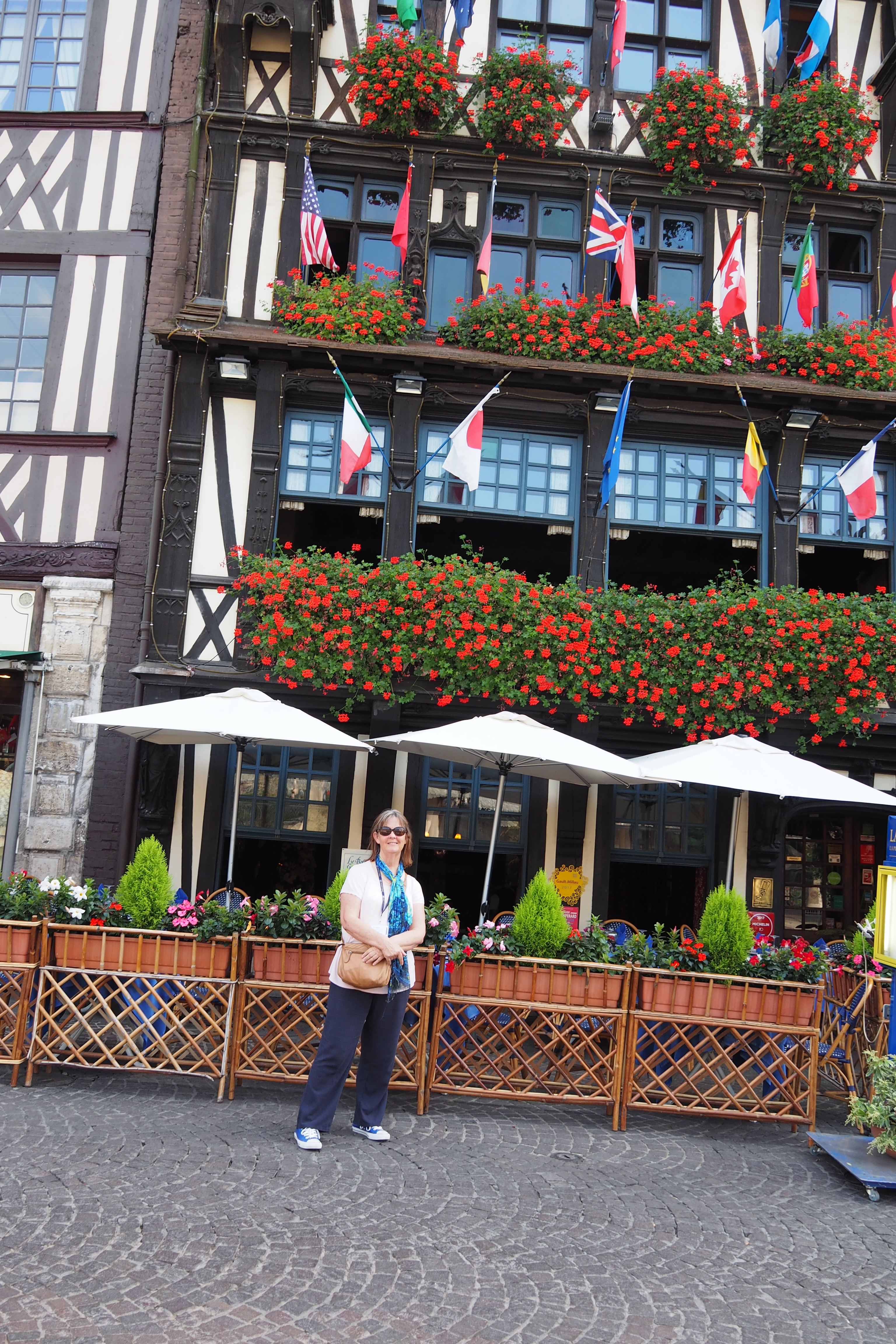 Bree out the front of La Couronne in Rouen

We decided to have a coffee but chose a tiny little cafe next door. 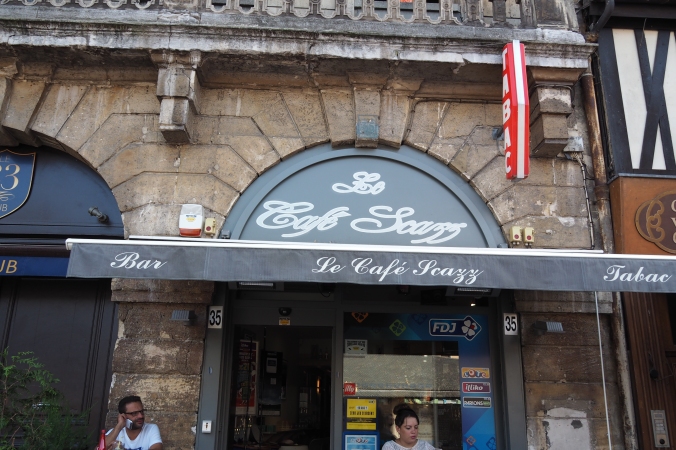 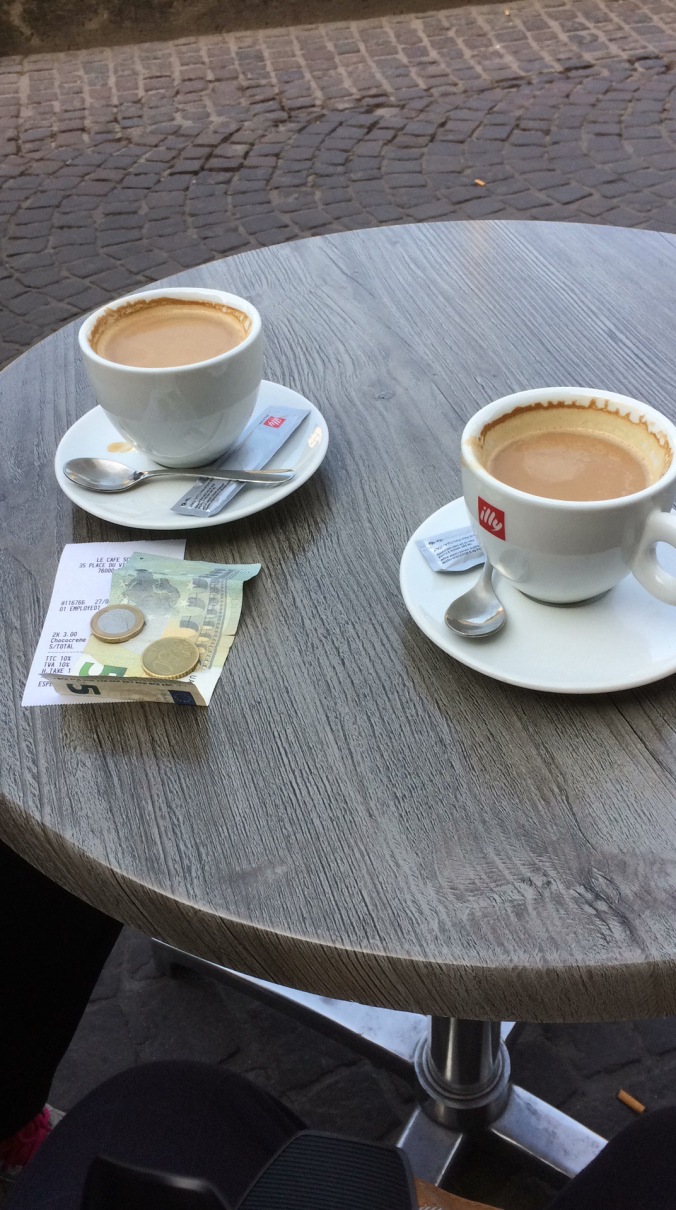 Our coffee…just what we needed

We sat and watched everyone walking on by or visiting the church to pay their respects to Saint Joan of Arc.  It’s weird how all those years ago she was burnt on the stake for heresy  and today she is a patron Saint of France.  There is a museum dedicated to Joan of Arc in the Archbishops Palace in Rouen where you can learn more about her life and her death.  Learning about Saint Joan of Arc in school, I admired her strength and her will.

Ah Rouen so much to see and do.  A couple of hours really does not do this wonderful city justice.  I plan on going back one day and staying a few days.  Yes I say this every post and I do hope to do it.  One must have goals.

We made our way back to the ship passing a market where locals were selling their wares.  I saw this and fell in love.  Would it fit in my luggage? 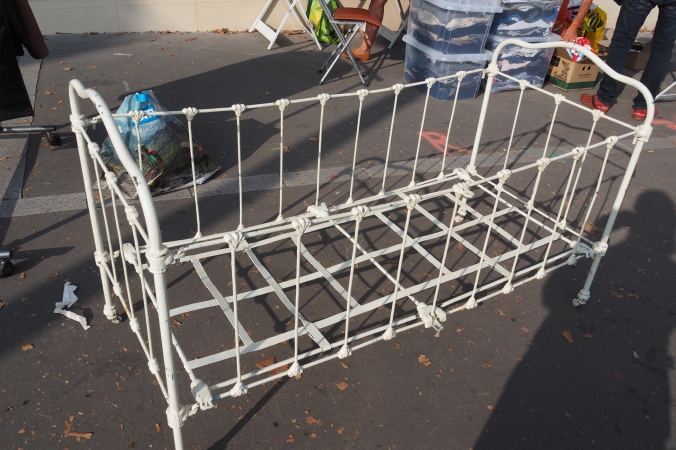 More on Rouen and the Cathedral in my next post.  Thank you for stopping by.