I was so excited to be visiting the seaside port of Honfleur. Was it like the images that are on the internet, would it live up to my expectations?

Honfleur such a beautiful place.  “Honfleur is a commune in the Calvados department in northwestern France. It is located on the southern bank of the estuary of the Seine across from le Havre and very close to the exit of the Pont de Normandie. Its inhabitants are called Honfleurais.”  –

Our first stop was the fish market, fresh fish caught early in the morning.

Anyone for a fish dinner

The famous “Greniers à sel” of Honfleur were built-in 1670 with stones from the city walls. They could store up to 10,000 tonnes of salt, which was then used to preserve cod for a longer time.  There were 3 of these amazing warehouses, one was destroyed by fire in 1892.  The salt trade developed at the end of the 16th century with cod fishing.Today these imposing buildings house exhibitions, concerts, conferences and many seminars and congresses throughout the year.

The ceiling of one of the two salt storage’s

As we meandered through the cobblestone lane-ways with either side half-timber houses I realized that Honfleur had more than met my expectations and we hadn’t even got to the old seaside port.

Maritime Museum of Honfleur is now located in this church

The old port and the colorful homes

The old port is known as Le Vieux Bassin and was built-in 1681.  Today it is one of the most sought after attractions.  The 17th and 18th century homes and buildings surrounding the port are listed as historical monuments.

Of course what tour in France would be without some food or wine?  We sampled some Calvados and I so wish I had purchased some to bring home.  It was delicious! 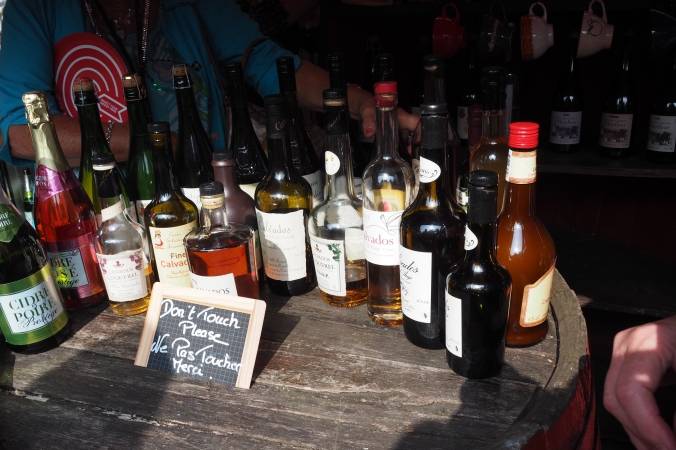 Calvados and yes we had samples from nearly all of these. 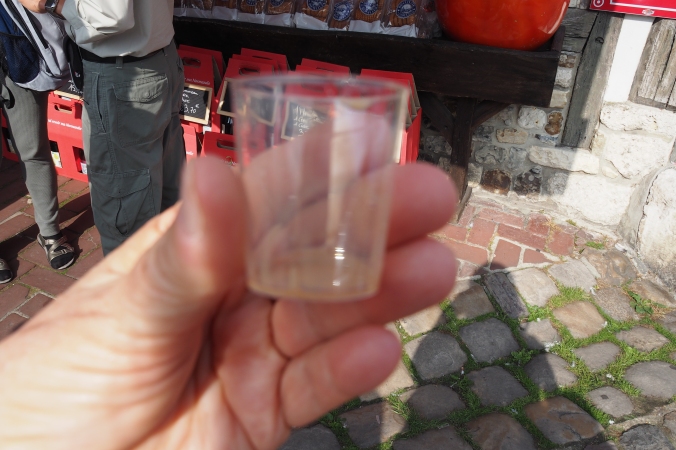 One of many samples that day

Once we had sampled  – oh ok drank  the Calvados, our tour finished however we had an hour or two to do as we pleased. A few on our tour went and found a restaurant to try the local mussels.  Muriel and I decided to wander around some more.

As we had passed the Saint Catherine’s Church (L’église Sainte-Catherine ) we saw lots of people in army gear and army vehicles.  The church was having a service to honor the men and women who lost their lives in the war.  Honfleur was the last of the towns in the Calvados area to be liberated.  This was on the 25th August 1944.  73 years since the town was liberated.

The celebration of Honfleur’s liberation.

Saint Catherine’s Church was built entirely of wood from the nearby forest.  It is the largest wooden church in France.

The exterior of Saint Catherine’s Church 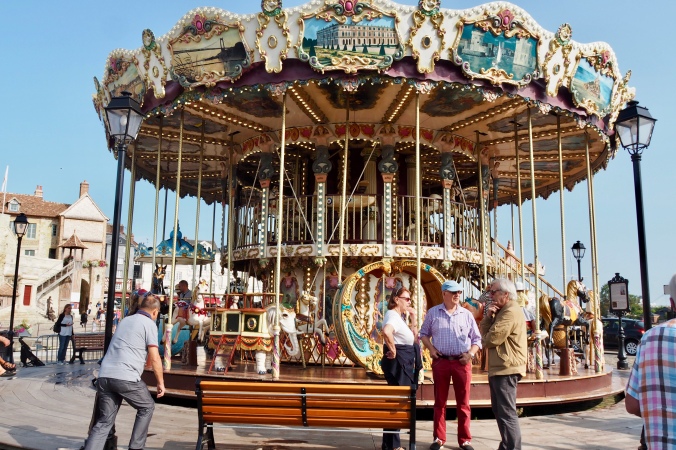 The carousel of Honfleur

The carousel of Honfleur has been set up every year since 1995.  From May to October it takes pride of place in front of the Town Hall and right by the old port.    It’s so gorgeous with its wooden horses. 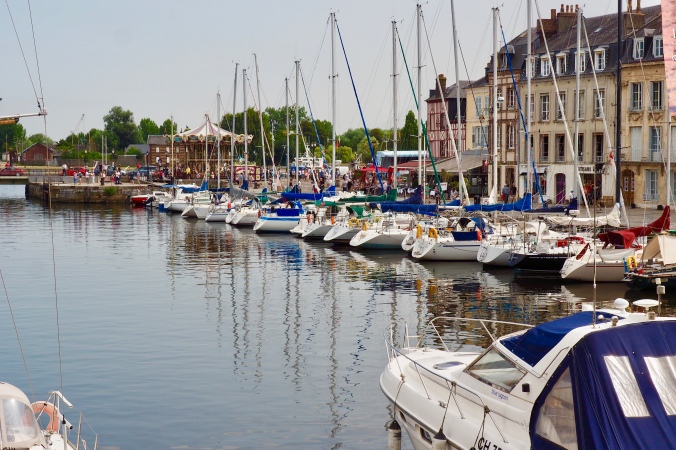 As we walked back to our meeting area we were privileged to see the locals in a parade to the memorial where they would lay wreaths in honor of those that lost their lives during the occupation in the first world war.

The celebration of the liberation of Honfleur 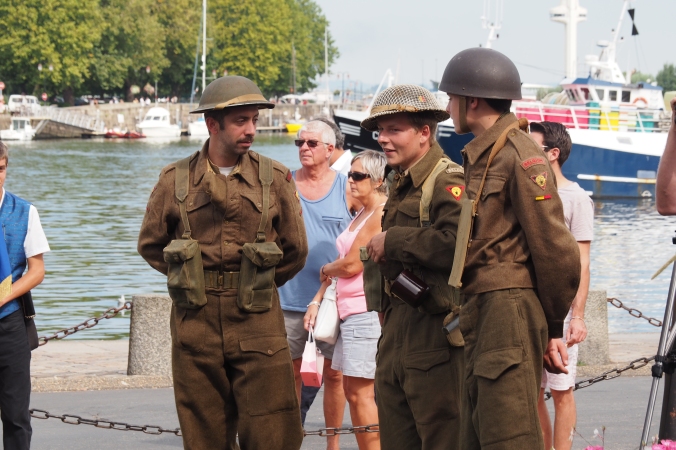 Celebrating the liberation of Honfleur

The battle of Normandy lasted nearly 3 months, longer than the Allied’s had allowed for. The liberators were welcomed everywhere in Normandy and tasted cider and calvados while the locals were able to have chocolate and tobacco once  more. 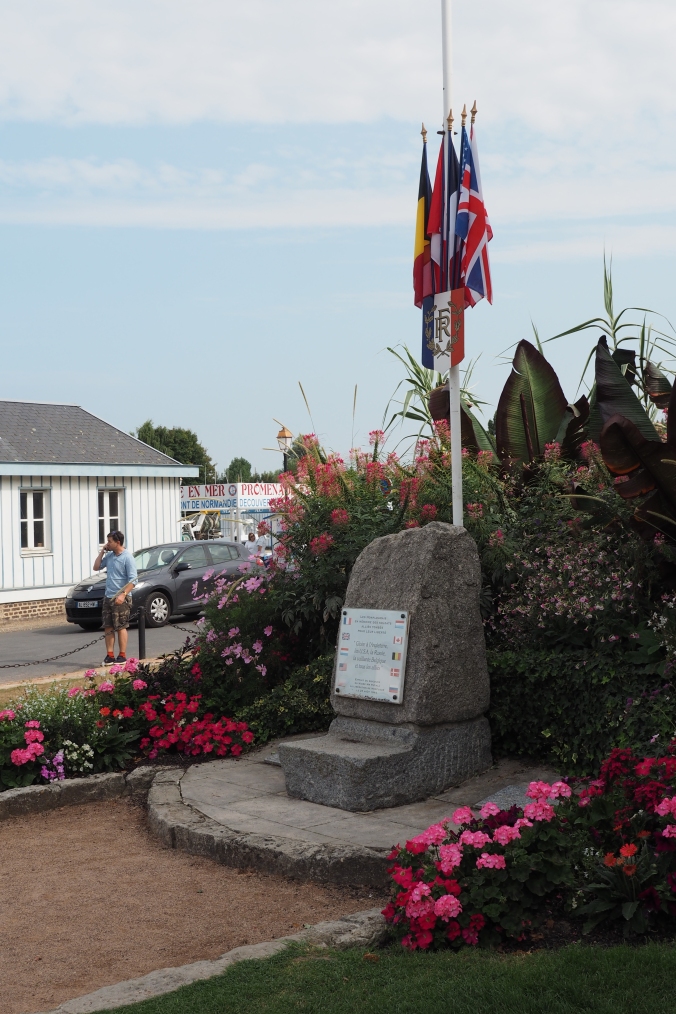 The Memorial to the Liberation of Honfleur

The Liberation of Honfleur

I think I walked around in a daze as everywhere you turned there was something to take a photo of.  Stunning flower displays, beautiful old architecture, and the one thing that would bring me back to France again and again, the people.