3/8/16
Today our ship docked in Bonn. We 3 Sisters had chosen the Bonn Sightseeing walk. A short walk through Hofgarten park and into the town square. I love how the European towns all have a Town Square or market place.

It was still raining so you still had to be careful on the cobblestones. Just getting off the ship was an art in itself!  The gang-plank was very slippery and one wrong foot, in the river you go!

Our  tour guide was very knowledgeable and I wish I had been able to record him, so I could listen to it later. At one stage when we were standing in the park it was all going over my head.  I couldn’t take it all in.  So I took lots of photos. However, I did learn quite a few things about Bonn.

Ludwig Von Beethoven was born  and raised in Bonn.  Part of our tour we went and saw his birthplace.  Every where around the town of Bonn are statues of Beethoven.  It’s quite funny as its widely known that Beethoven hated his birthplace.

The University of Bonn  is the former  residential palace of the Archbishop and Kurfürst of Cologne, built by Enrico Zuccalli from 1697-1705. It  crosses two streets and one side over looks the park or Hofgarten. 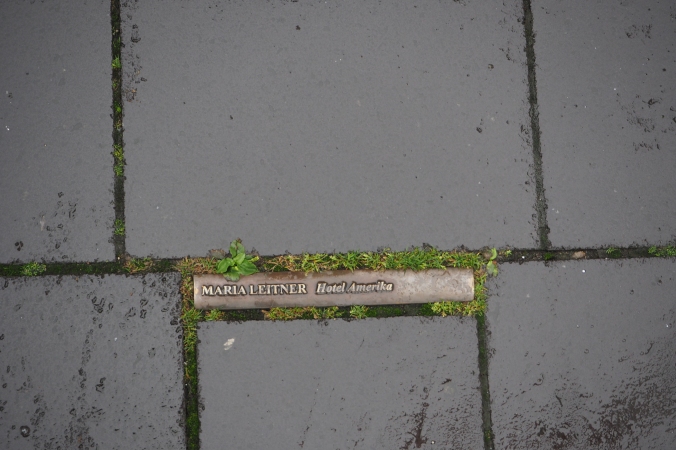 In 1933 in front of the Town Hall steps, books were burned by University students during the Nazi period.  3 years ago they have made a memorial and there are  60 copper plaques of the books that were burnt that day.  It’s very somber to see these plaques in the cobblestones.   To think  reading and writing was not allowed by the Nazi’s.

After we had seen Beethoven’s birth place the 3 of us left the guided tour and walked around the small streets and window shopped.  We avoided the stores that were also in Australia. Why travel all those miles/km and shop in the very shops we have here!

In the market place there are cafes and restaurants and every day there is a market. The choice of fresh fruit and vegetables was amazing, and all locally grown. We 3 purchased some berries, however we actually forgot we had them and 2 days later, in the bin they went. We at least  helped the German economy by buying them 🙂

We found a gorgeous little boutique called Zero, and we 3 went in and started looking at the  blouses.  German sizing is very different to here in Australia, however the shop assistant was very helpful. Limited English but she did very well.  Paula and I purchased 3 tops.  2 for me.

Coffee was out next purchase so we found a little coffee caravan in  the marketplace and between his German and our English we managed to get 2 coffee’s and a tea!  The tastiest coffee so far.

The Bonn economy boomed from our spending.

After our shopping spree we met  up with the Tour guide and made our way back to the ship.

Next stop Cologne or Koln as the Germans call it,however, there was ice cream to be eaten on the ship first before we took the coach to Cologne