An early start to the day with breakfast and then off on our day trip to see the sights of Lisbon and beyond.

Our first stop would be at Freedom Park –  Parque da Liberdade.  Back in 1903  it was renamed to King Edward VII a tribute to King Edward VII of the UK, who visited Portugal the year before.  It is 25 hectares in the centre of Lisbon, including a monument dedicated to the 25th of April Carnation Revolution, and a greenhouse. And it’s the perfect location for the book fair (Feira do Livro) that takes place there every year.

Ours was a quick stop enough time to take a few photos of the view. 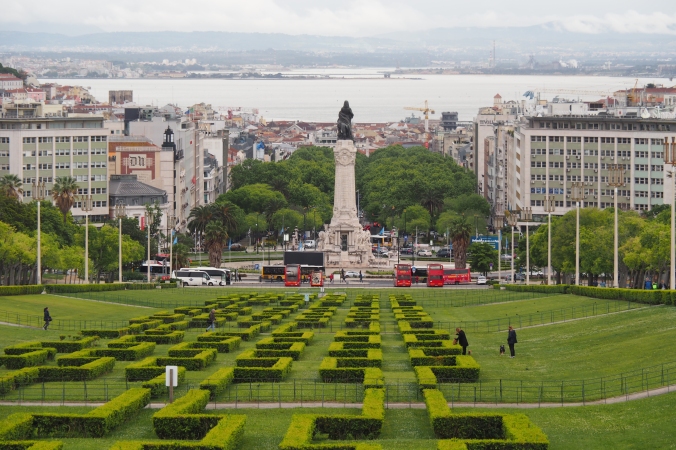 The view of Parque Eduardo VII

The views were amazing. Lots of red hop on hop off busses.

Next stop would be the Belem Tower and a spot of morning tea.  I couldn’t believe how many tourists were at the Tower.

The Belem Tower sits in the shallows near the mouth of the River Tagus.  It was built between 1515 – 1521 as a fortress.  So valuable and iconic it is now a protected UNESCO World Heritage Site.   You are able to go inside and climb the steep spiral staircase to an amazing view over the esplanade and river.  Unfortunately ours was a quick visit, take a few photos as our guide raced on ahead.  This would be the norm for the next few days.  Click and run!  It was a shock to the system. 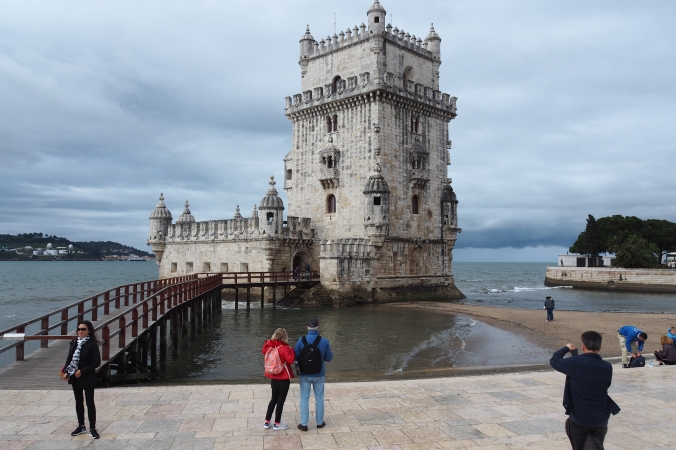 Once we had taken heaps of photos of which will be on Instagram  we made our way to the cafe nearby.  Quick visit to the bathroom or Loo or toilet depending on where you come from. Then inside to have a coffee/tea and everyone had a Pasteis de nata a Portuguese Custard Tart.  I was given a gluten free muffin.  It was lovely! 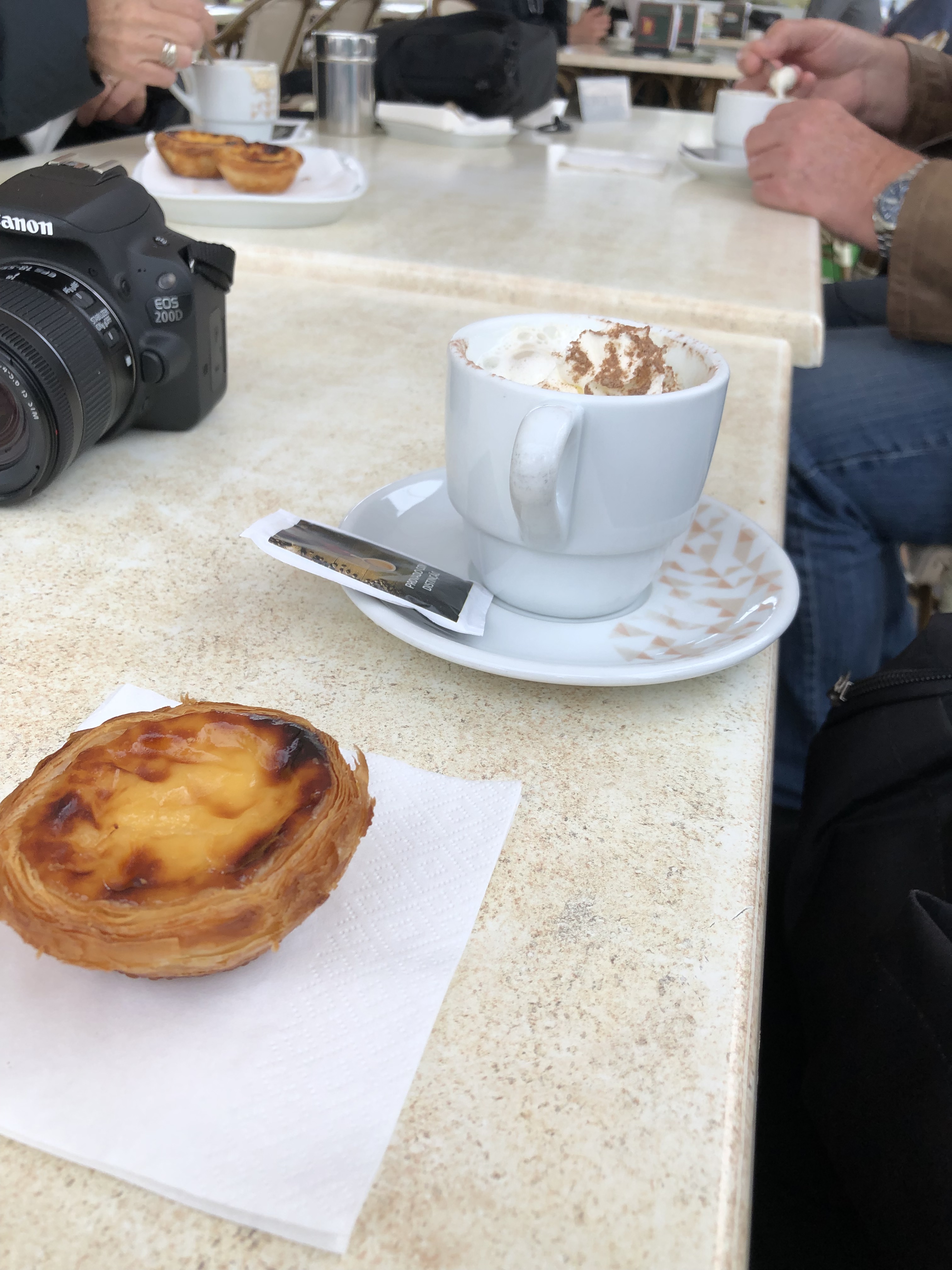 Next stop would be the Tribute to the Age of Discovery -Padrao dos Descobrimentos.

This enormous monolith leans over the River Tagus to resemble the prow of a caravel, the type of ship commanded by the Portuguese navigators in the 15th century to chart unexplored oceans and discover new lands. 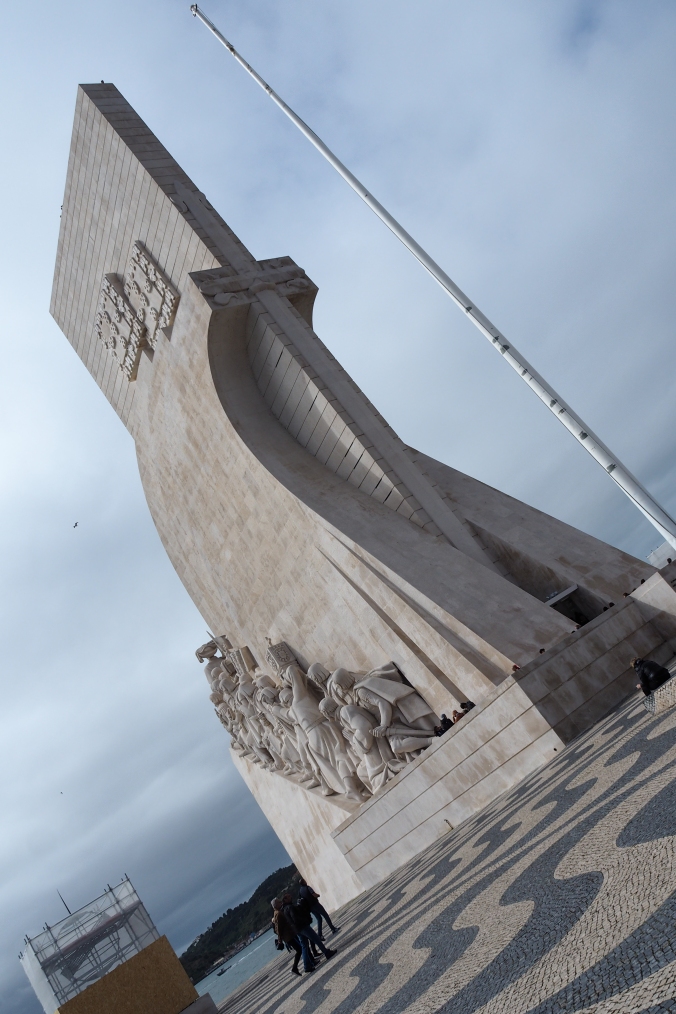 Tribute to the Age of Discovery – Lisbon

It was built in 1960 to mark the 500th anniversary of Henry the Navigator.  it pays tribute to all those involved in the Age of Discovery. On both sides of the statue are prominent figures like Vasco da Gama, Fernão de Magalhães, and Pedro Álves Cabral. Henry himself stands at the fore, caravel in hand. After admiring those immortalized in stone, you can jump in an elevator and be whisked to the top of the monument for a seagull-eye’s view of the riverfront and the surrounding vicinity.

The Tribute to the Age of Discovery

On the esplanade is a huge pavement compass and a giant mosiac map of the world with all the locations and dates when each new land was discovered.  Trying to take a photo of this was hard with all the tourists including us walking all over it. 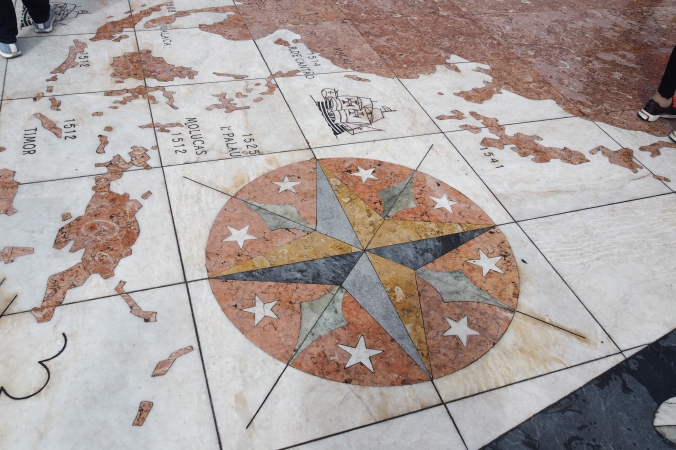 The map of the world with all the dates and lands that were discovered.

Our next stop, we would be visiting the Ajuda National Palace. 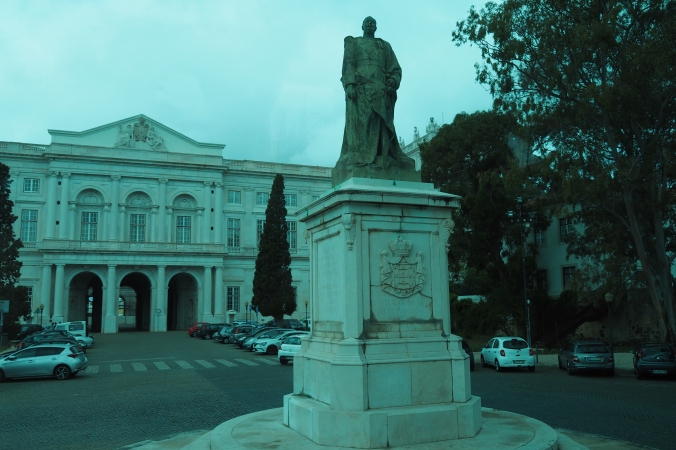 The Ajuda National Palace or Palacio Nacional Ajuda is located in Belem.  Upon entering the Palace, you can feel as if you are part of the past..  If your very quiet you can hear the swish of the beautiful ornate dresses and the gentle footsteps of the slippers as you walk down the corridors.  Each room is a sight to behold.  The Throne Room takes up most of the entire south wing of the Palace.  23 Marble Statues greet you upon entering the Palace.

It is located on top of the Ajuda hill, and with a superb view of the Tagus River.

One of the many corridors in the palace 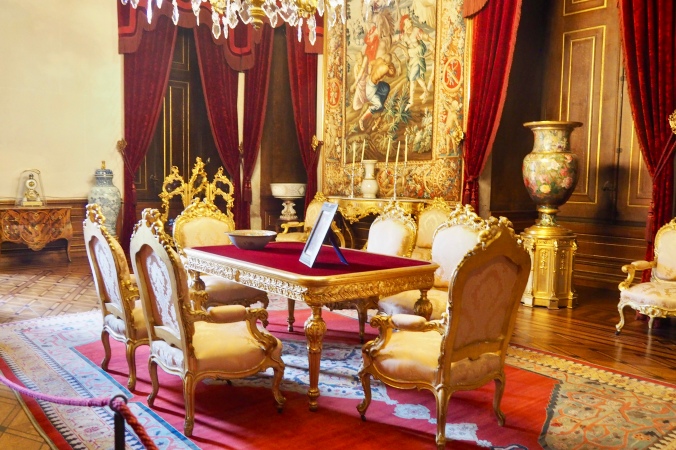 Our next stop would be Cascais for lunch at Visconde da Luz.  We had a short time to walk around the park called Visconde da Luz same as restaurant after lunch and visit the market that was there on the day.

Lunch was lovely, lots of wine good food and great company.  I had melon with ham  and cheese then steak and vegetables and chips then dessert.  All gluten free.  The rest of the group had fish instead of the steak. 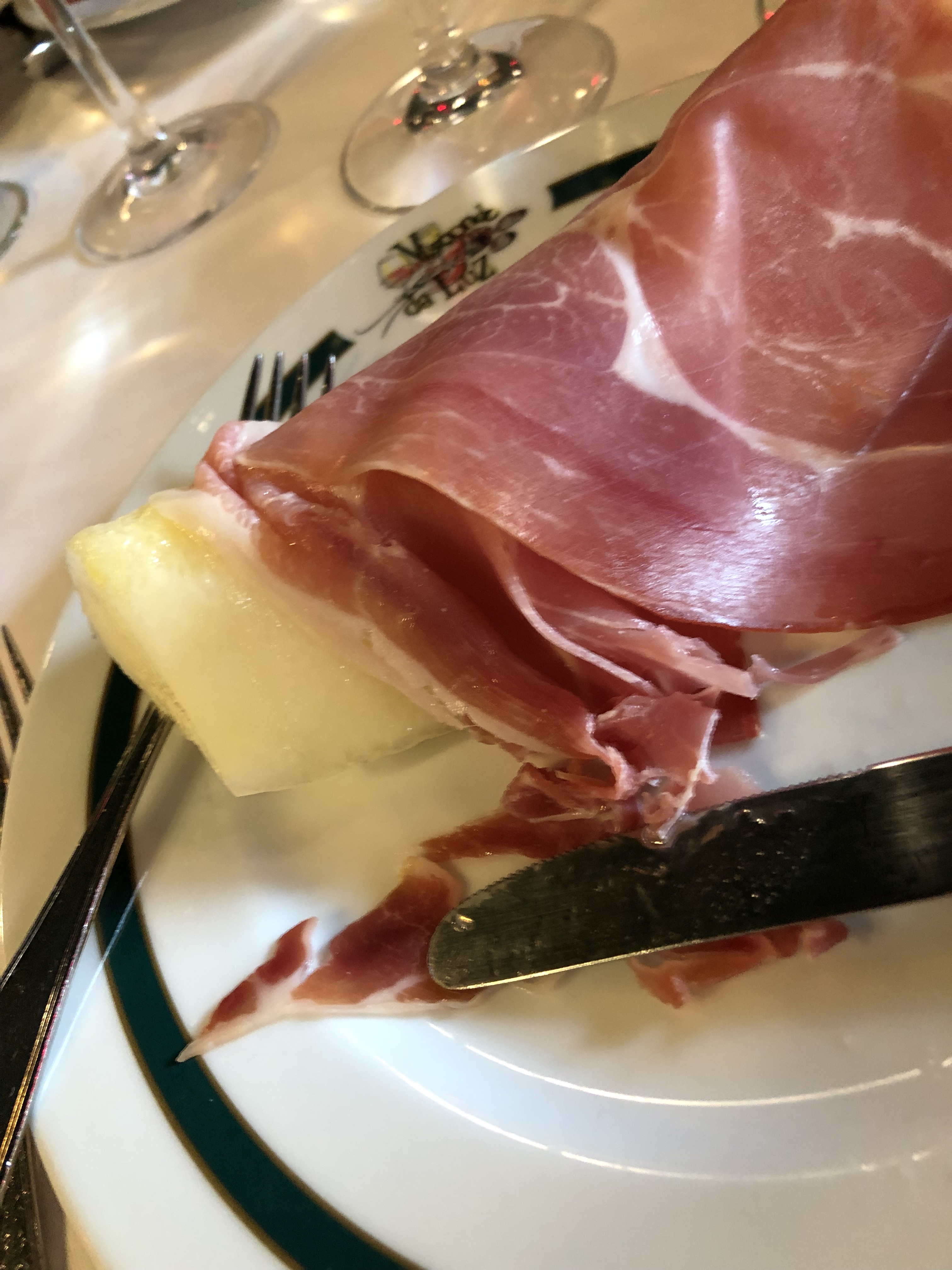 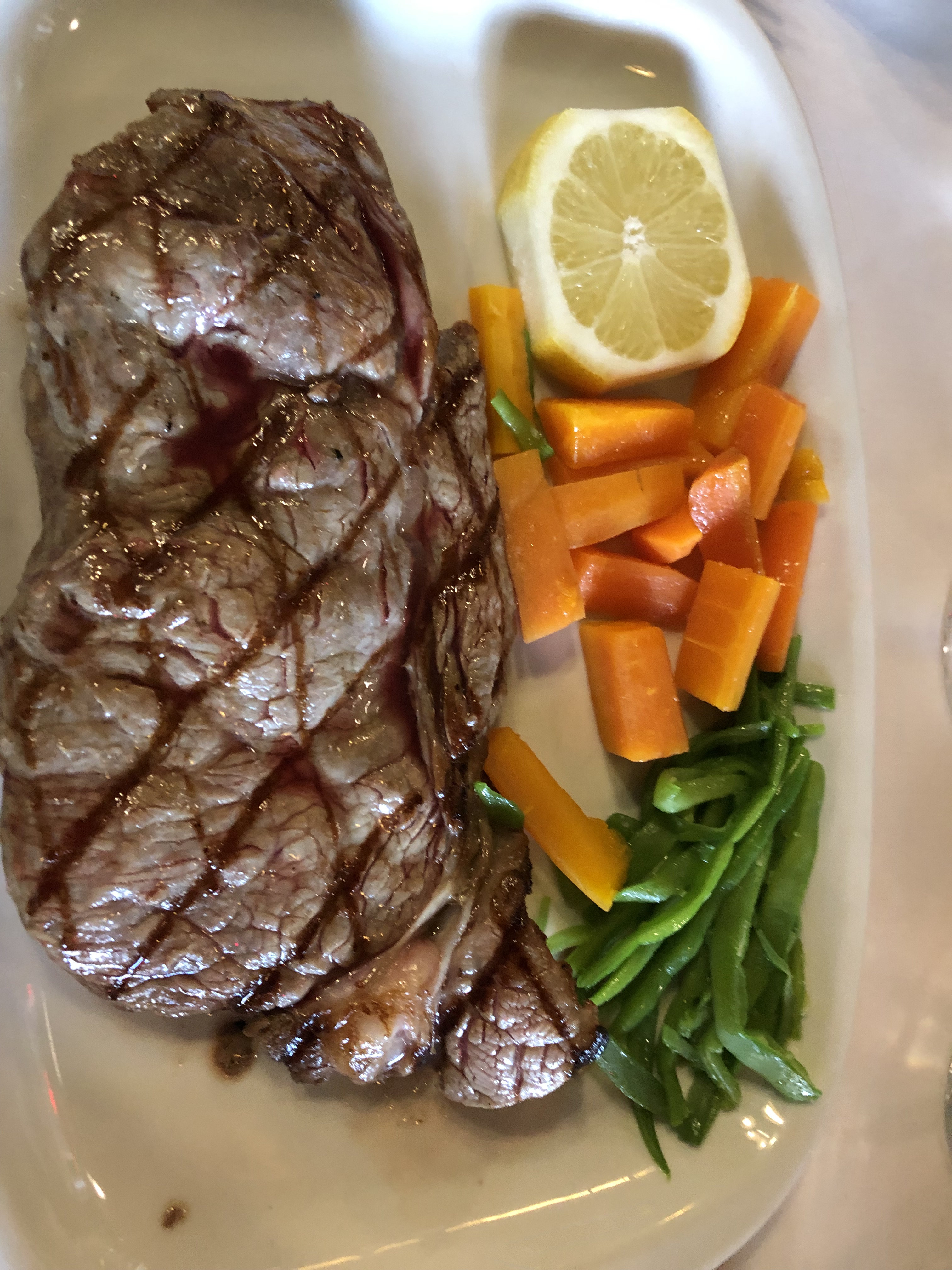 Sarah having fun after lunch

The Carousel or Merry go round at the park

The market at Cascais in the garden of Visconde da Luz

Back on the coach to head to Sintra where we would visit the Palace of Sintra.  Once there we climbed the initial few stairs to the Palace and looked out over the town.  A few of us made the decision not to go into the Palace and went back to the shops and wandered leisurely around.

The view of the town

It was lovely walking around the town at our own pace.  So nice to slow down for a bit and actually enjoy the place.

A lot of steps to work off lunch

What a day it had been we had been on the road since 8am and would be getting back into Lisbon around 6.  Dinner tonight would at our own cost.  As we left the Sheraton Hotel in the morning I saw on the next corner a restaurant called The Paleo Kitchen.  We had checked it out on-line and it was going to be open.  Sarah and Peter came with us.  We had a lovely dinner all paleo which is also gluten free.  We enjoyed some organic wine also.

I think once my head hit the pillow I was asleep.

The next day we would leave Lisbon to head to Evora.  Another long day and another early start. 45 thoughts on “Lisbon and Beyond”

Follow Travel and Lifestyle with Bree on WordPress.com
Join 2,020 other followers