On Saturday I made my way into the city to catch up with a friend who was visiting from Perth, Western Australia. Such a bleak cold Saturday so what does one do apart from staying indoors and keeping warm.

We got on a tram and made our way to the MCG – Melbourne Cricket Ground.  My friend Gina had only been past the ground via a train.  So a walk around the outside.  No AFL games were being played this day so it was very quiet.

The MCG is home to AFL Football and many clubs based in Melbourne this is their home ground.  MCG is also home to the MCC – Melbourne Cricket Club.  It was founded in 1838 and is one of the oldest sporting clubs in Australia.

In 1859 the members drafted the first rules of Australian football. In 1877 it hosted the first Test Cricket played between England and Australia.

Around the grounds are statues of famous sports people.  The opening ceremony of the 1956 Olympics were held at the MCG. 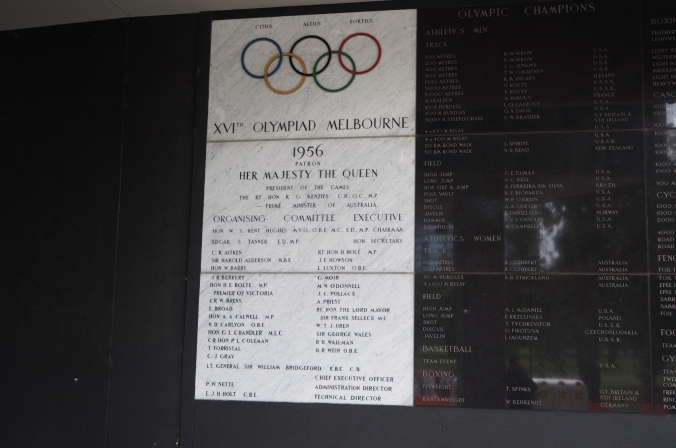 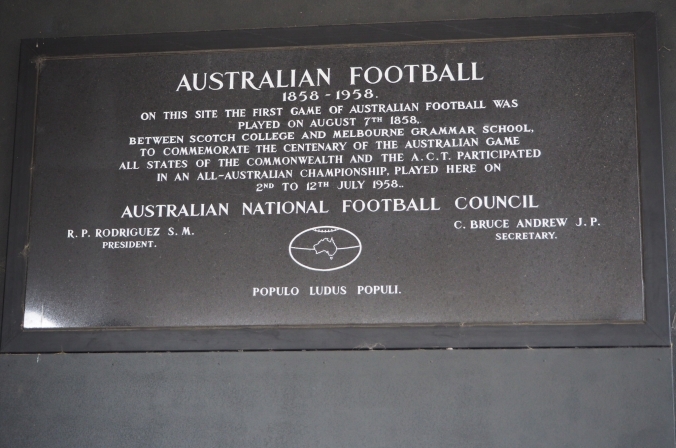 The gardens have a history of over 150 years and is visited by over 2 million people every year.  It’s very easy to get to you can catch a tram or tram or just walk.

We walked down a tree-lined pathway to the Fairies Tree. Ola Cohn’s Fairies Tree – has carvings on the stump of one of the Red Gum trees and its over 300 years old. 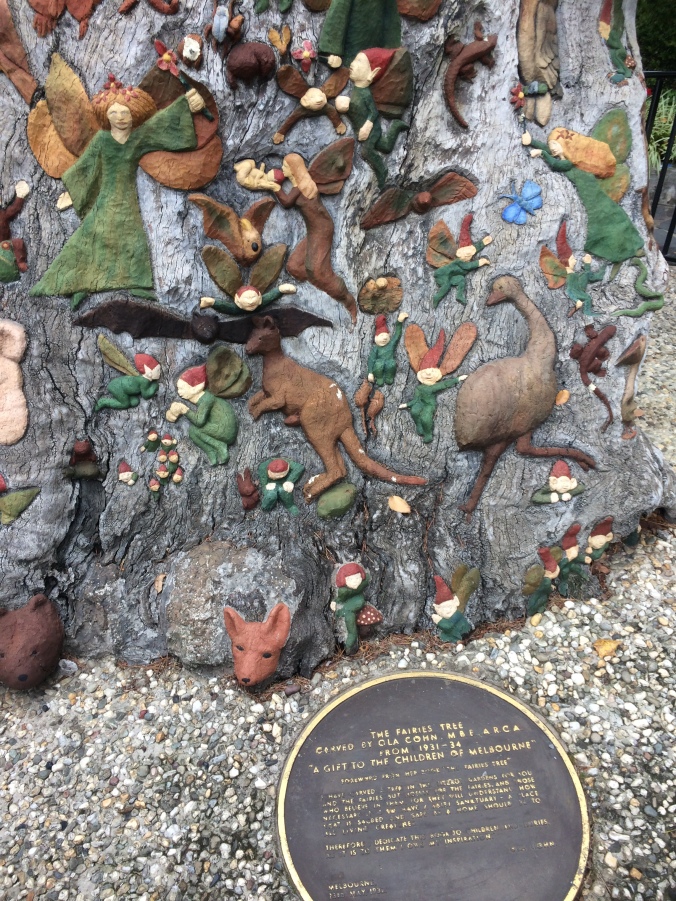 From 1931 to May 1934 – Victoria’s Centenary Year – Miss Cohn worked on the delightful likenesses of fairies, dwarfs, gnomes, a marvelous jackass, koalas, flying foxes and a host of typical Australian animals and birds. She used all the natural irregularities and curves to transform the tree trunk into a thing of beauty.

Opposite the Fairy Tree is a Tudor Village.  This was modelled in cement by Mr. Edgar Wilson, a 77-year-old pensioner who lived in Hamilton Road, Norwood, London, England.  The model buildings represent a typical Kentish village built during the “Tudor” period of English history. The village is composed of various thatched cottages, a village church, school, hotel, barns, stocks, pump, and all public buildings which make up one of the delightful villages. Also included is a scale model of Shakespeare’s home and Anne Hathaway’s cottage. 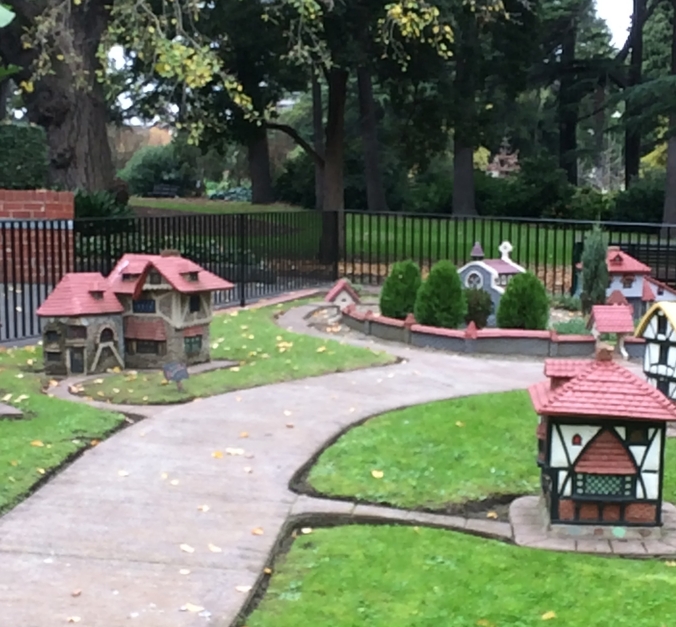 It was bitterly cold on this day.  The wind was coming straight off the antarctic I’m sure.  Time for a coffee and maybe a bite to eat. We found KereKere pronounced Kerry Kerry named after the Fijian custom of  which a relative or friend can request something that is needed and must be willing given with no expectation of repayment.  When we ordered our coffee and let me tell you this coffee was amazing, served in beautiful large and wide glasses we were also given a large playing card.  We found out that each month they have a community event.  On a board they list 4 different events and the one with the most votes is the one they will do.  To cast your vote, you place you playing card in the box of the event you think should be done.  I can’t remember all them but I voted on a local artist coming to the cafe and doing some painting. What a wonderful idea I thought.

Once we had warmed ourselves up on the coffee and took advantage of the  heating we ventured  to the Cooks cottage opposite the cafe. 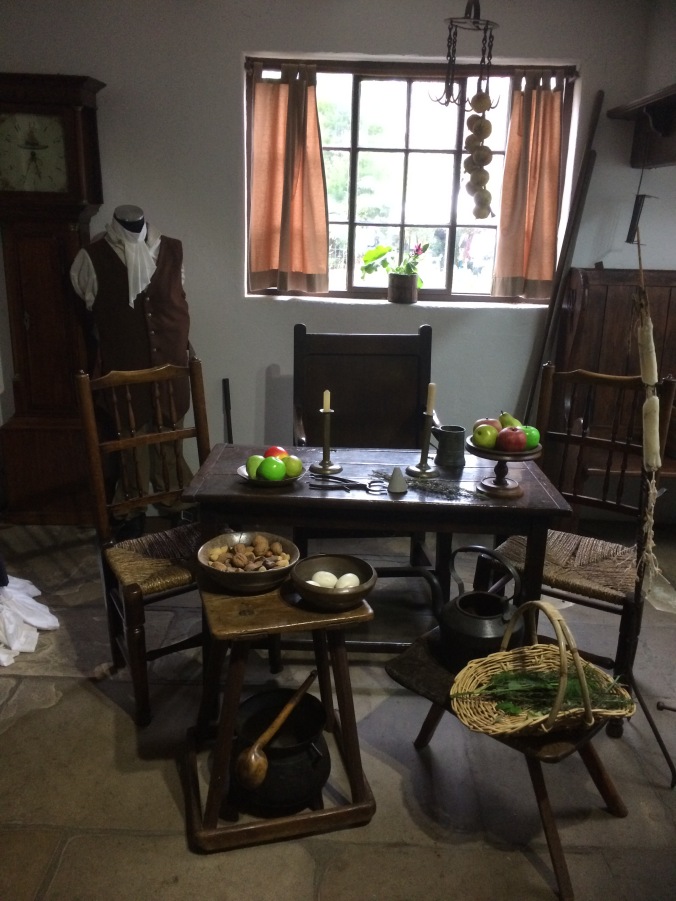 The main room in Cooks Cottage

The small bedroom downstairs – with the chamber pot

This is a memorial to Captain James Cook.  He was a British explorer, navigator and captain in the Royal Navy. He was born in November 1728 and died in February 1779. This cottage is said to be where he spent some of his youth.  .  The cottage was transported from England to Australia in 1934.  Its been on the same ground in the Fitzroy Gardens since then.  A typical English garden was built around the cottage. You can try on clothes that would have been warm around the time Captain James Cook was alive.  We chose a typical captains hat.  The cottage is very small.  Has a living area and a small bedroom downstairs.  I didn’t venture up stairs as they were very step and with my walking stick and sore knee I didn’t want to take the chance.  Gina went up and said it had a bedroom which would have been the main bedroom.

As we were leaving Fitzroy Gardens we passed the Conservatory.  We didn’t go inside this day but I have in the past and its filled with the most amazing plants and flowers.

The Conservatory in Fitzroy Gardens

We then  made our way through the  Treasury Gardens and up to the old Treasury Building at the top of Spring St.  Jumped on a tram and the best thing it was in the free zone. Melbourne has made travel in the CBD free travel which is great for tourists and workers.

We went to Gina’s apartment where she grabbed her coat and then back on a tram to Southern Cross Station where we would part ways.  Gina was going to friends for dinner and I was heading home.  What a lovely an inexpensive way to spend some time in Melbourne.

Now if you’re visiting Melbourne you can arrange  tours of the MCG and MCC.  I do plan on doing the tour later in the year with one of my friends from the Football cheer squad we are in.  I will do a blog post on it after I have been.

To get to Fitzroy Gardens you can catch a train to Parliament Station or Jolimont. The Free City Circle Tram line the stop is Spring St Treasury Buildings.  15 minute walk from Federation Square.  Tram’s 48 or 75 the stop would be Wellington Street opposite the park.

19 thoughts on “Fitzroy Gardens and the MCG Melbourne.”