Ghent – along the canals

It was raining lightly when we arrived in Ghent where we were to have an hour boat cruise along the canals. The boat had a glass roof, and sliding glass windows, so no chance of getting wet.   Lunch would be served along with refreshments, champers, beer, soft drink or water.  The sparkling was going down a treat.  I think the crew were a bit worried we were going to drink it all.  They kept offering the beer to us.  Perhaps only 2 men were drinking the beer! 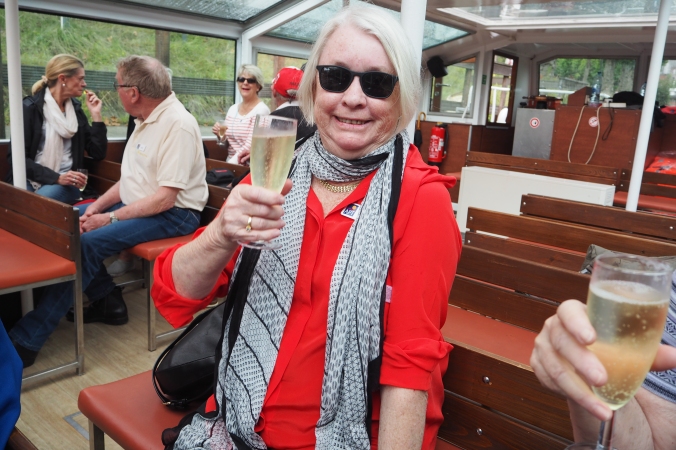 After 10 minutes the rain stopped so the crew opened up all the windows to allow the cool breeze to glide  in.  August in Europe can be hot, add rain and you end up with it being hot and steamy.  Made the Australians feel at home!

The boat meandered down the canal into the bustling cafe and restaurant precinct and along the way we passed many private homes with balconies over the canal.  Flowers, everywhere along the walking paths and on the bridges.  We even went past an old castle!  Many people were out walking along the cobblestones or enjoying a wine in one of the many cafes in the sunshine.

I also love the way the Europeans make use of every bit of space they can.  We passed tiny little cafes with balconies just big enough for a table and a couple of chairs.  Tunnels going nowhere, Buildings built right into the water.  These buildings date back hundreds of years.  One building had 1726 on the front of the building.  So much history in such a little place. 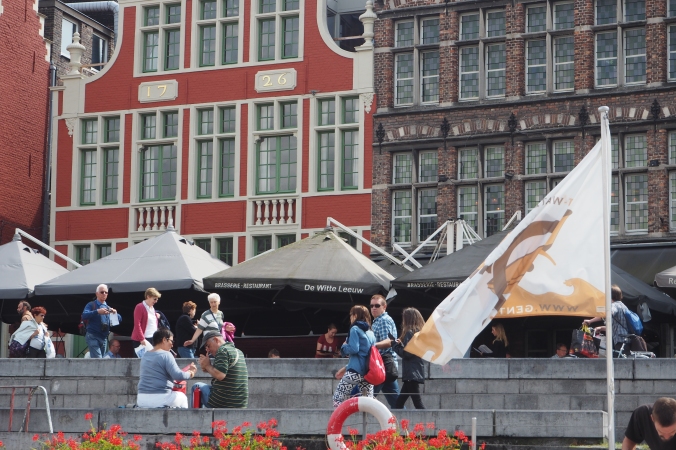 The Lonely Planet says” Ghent is Belgium’s Best Kept Secret.” Most people who go to Belgium visit Bruges or Brussels. Best Kept Secret….ooops I might have let this cat out of the bag!

Lunch on a river cruise, came with a bit of trepidation for me.  Being gluten-free/Paleo can be hard when eating out, on the ship it was easy. However I need not have worried!

My lunch was handed to me first, I opened it to find 3 rolls filled with meat and salad.  Those that know me well, know I am not really a salad roll eater.  Can I say these gluten-free rolls were amazing.  Tasty, soft , filled with the most amazing meat and salad I have ever eaten.   Take note Australia, those of us on special diets don’t want tasteless cardboard.  This bread was good!  Personally, I think my lunch was better than those of my sisters.  It was so filling I couldn’t eat it all.

The hour went by very quickly and then it was back on the coach to Paris. What a lovely way to have lunch, sitting back with champers watching Ghent pass us by as the boat gently wound its way up the canal.

I plan on going back to Ghent and spend a few days instead of an hour or two.  I feel so privileged to have even had a glimpse of this beautiful place.