After a delicious breakfast at the Sheraton Porto we went to the front desk to organize our tickets for the Hop on Hop off bus.  We chose the Red one as we have found in other cities that one has been the best.  At only $15 euro’s each it was quite good.  There were no brochures for the Yellow Hop on Hop off Bus….I wonder why.  The Blue was a few Euros more.

The time table said it would be at the stop around the corner from the hotel at 9.30 am.  Reception said it was less than 5 minute walk.  So off we trot it was less than a 2 minute walk to the stop.  We kept walking and went past a stop that indicated it was for the Blue Bus.

No more stops.  I got out the map and we walked back to the Blue Stop. As we walked past the Blue Stop initially we noticed a couple waiting for a bus.  So we went up to them and asked if they had seen any Red busses.  Plenty of Blue went past.  They were also waiting for the Red Bus and had been told by the same hotel that it started at 9 and would be at the stop by 9.15.  So we chatted for a bit.  They were from Belgium and he had come there for work.  As we chatted many Blue busses came past and then yellow.  Where was the Red bus?  The lovely lady rang the Red Bus company and they said one would be at our stop by 10!  So we waited and waited and chatted.  They talked about an amazing restaurant about another 5 minute walk further from the stop.  We must have walked past it.  Meals were around $10 Euros for a course and a glass of decent Portugal wine.  Pity we were heading to the ship later today.

10.30 the bus finally arrived.  We had been waiting over an hour in the rain.  Boarded the bus.  The top deck was full in the undercover area so we sat downstairs.  We eagerly put the headphones on for the audio.  Music was playing but thats ok as we were in the business district.  Although we were close to  the Stadium Bessa.  You could see the stadium and the grounds from the Sheraton Hotel. 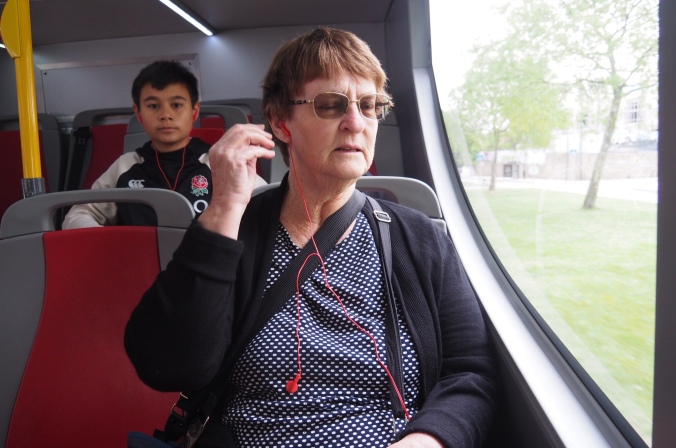 Muriel listening to the music

As the bus made its way around the streets a very brief description was given.  Quite surprising as most of the tourist busses they mention a lot of the history of the place.  The bus took us past the Atlantic Ocean. Wild and wooly the waves crashing on the rocks.  I tried to take photos through the rain on the windows.

Before we caught the bus we had decided we had plenty of time to do two trips around on the bus.  It said on the brochure it takes an hour from start to finish.

Sitting opposite us were two ladies who I mistakenly took a photo of. 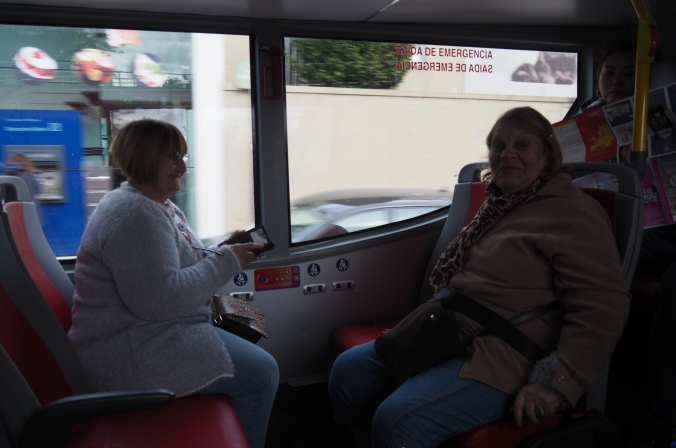 The lovely ladies on the bus –

From then on whenever we tried to take a photo out their window they would jump up to get in the shot.  When I think back it was funny.  I said to Muriel perhaps they were 2 sisters also.

We saw this strange building as the bus tootled along. 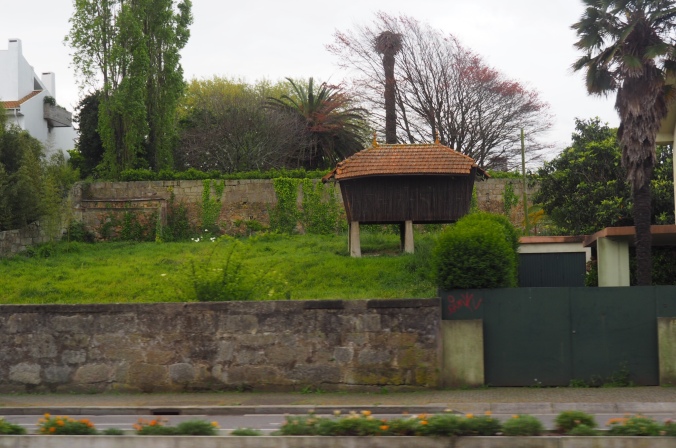 If anyone knows what it is can you let me know please? 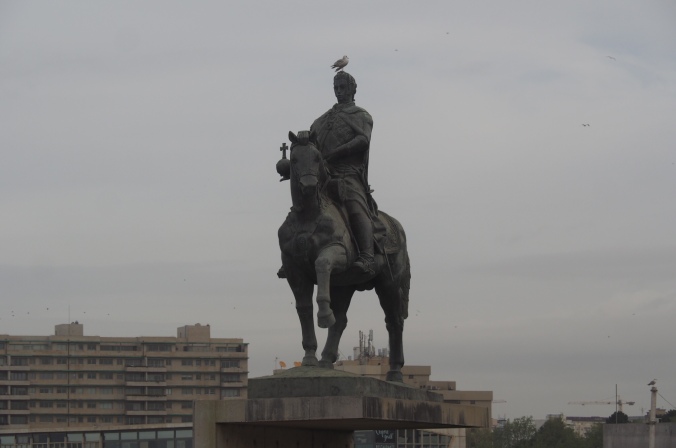 The seagull getting a great view of Porto 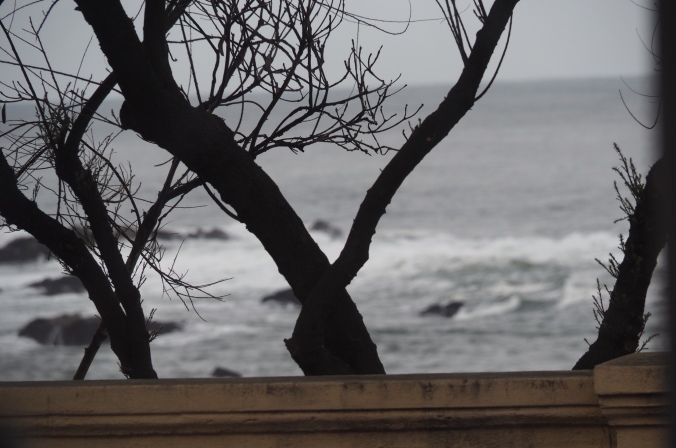 The bus went along the Douro River and it was lovely to see the River meet the Ocean. 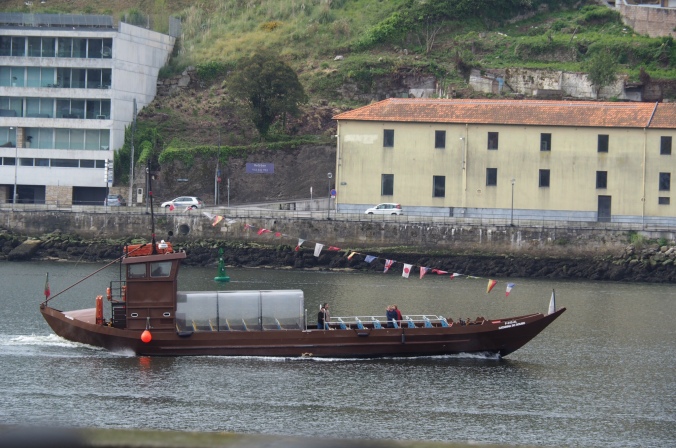 One of the many traditional boats on the Douro River

The bus went past the Tram Museum which opened in 1992. The first trams in Porto began in 1895. 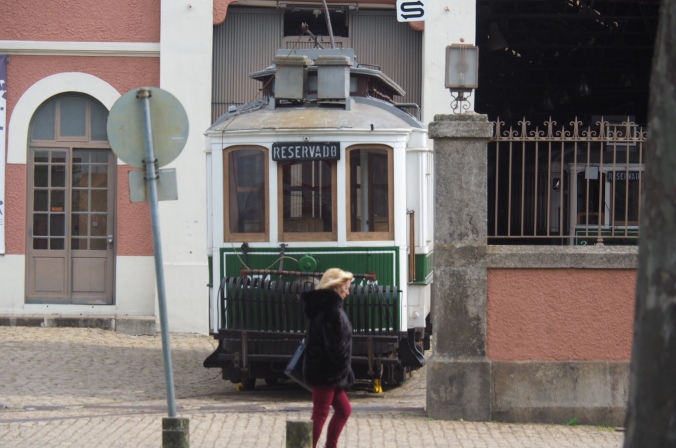 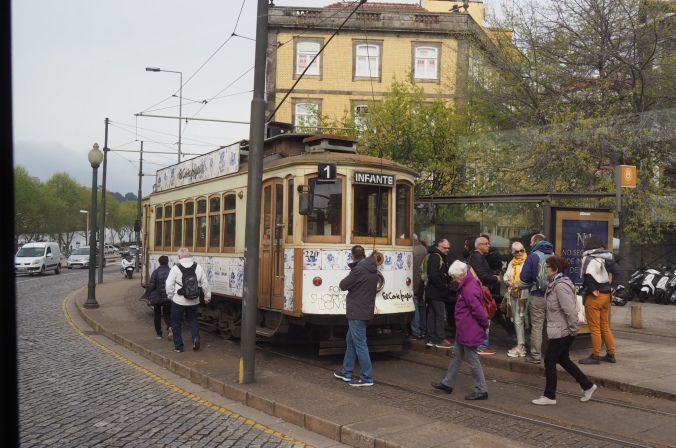 One of the many colorful Trams in Porto 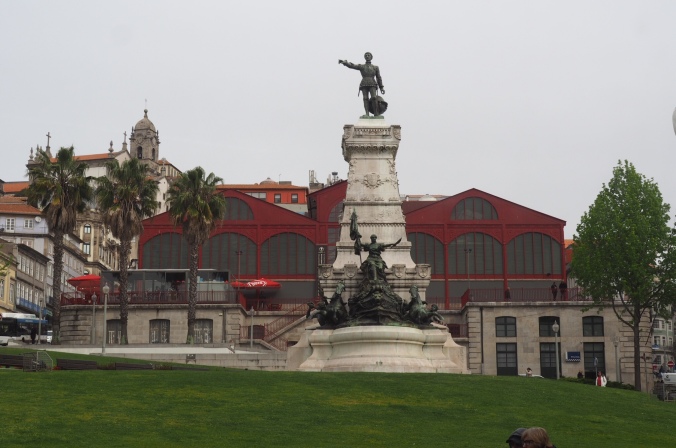 Statue of Prince Henry the Navigator

Prince Henry the navigator was an instrument in discovering  new worlds in the 15th Century.  A very large monument to him in such a small square.

We finally got into the city.  Due to many streets being one way and narrow and it was busy with cars and people and busses.  We realized we wouldn’t be doing a double trip as the time was ticking along. 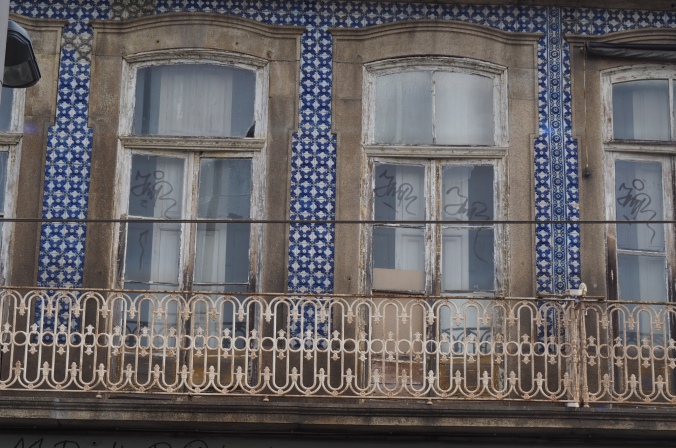 One of the many buildings along the Douro River.  The main feature is the tiles.

We noticed many abandoned buildings along the river.  They are slowly renovating them. 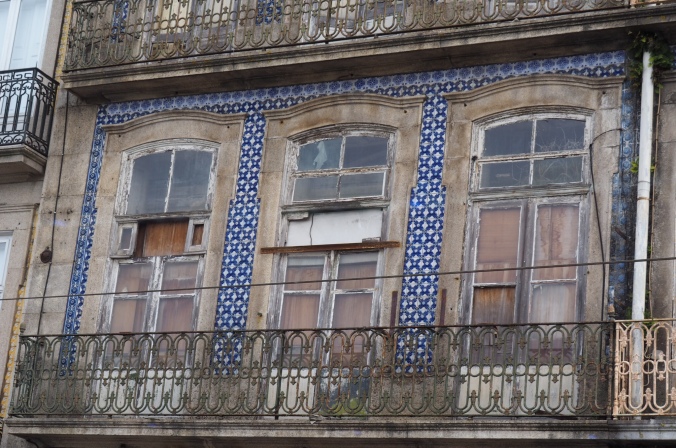 Another picture of the building with the tiles

We were being picked up from the hotel at 2pm or before so were told to be back no later than 1pm.

Traveling on the hop on hop busses is certainly an amazing way to see a city.  You can as the name implies hop on and off wherever you want!  See the city your way.  Just unfortunate for us that the busses were running late that day.

On entering the hotel we saw Peter and Sarah sitting on one of the many lounges in the foyer so we sat down with them and chatted till our coach came to pick us up.

*One of our guides on the ship would have done an excellent narrative on the bus.  She spoke clearly (with a Portuguese accent) her knowledge of Portugal was brilliant.*